The Magic Mandolin - Project and music

In 2012 the Mülheimer Zupforchester brought together the authors of 'Die Hüter des schwarzen Goldes’, Inge Meyer-Dietrich and Anja Kiel, with composers Dominik Hackner and Aris Alexander Blettenberg.
The following two years have seen a textual revision of the story and compositions made to match, which have led to an exciting musical reading (world premiere on the 21st of March 2014 in the Salzlager Hall of UNESCO world heritage site Zeche Zollverein in Essen). The accompanying music has been recorded by the orchestra in 'The magic mandolin’.
On May 30th in 2013 Blettenberg and Dominik Hackner met in Mülheim in order to musically design the work. At that time only the main theme (black dwarves) had been composed. Together, they quickly developed essential dramaturgical elements and then composed the next pieces individually in the following months. Some of them have been discarded, others deepened.
The composition of the music to 'The Magic Mandolin’ is the first joint project of Dominik Hackner and Aris Alexander Blettenberg. The sheet music for plucked orchestra is published by Joachim Trekel Musikverlag, Hamburg.

In the underground world of abandoned mines, you can find the keepers of the ‚black gold’, the legendary dwarves. Their greatest treasure, the power stone Achazurite, keeps the world in balance, above and below ground. But this guarantor for the future has been stolen. Sophie and Luca embark on an adventurous quest, crisscrossing underground ways from the Mining Museum in Bochum to the Unesco world heritage Zollverein. On their way, they encounter other mythical creatures – a werewolf, the wise woman, the ancient mountain spirit – thereby more and more getting their lives in danger. Can the magic mandolin help them face those dangers?

The short overture of ‘The Magic Mandolin’ introduces the mythical and adventurous atmosphere of the story.
The main theme, gracefully treading, represents the legendary black dwarves, who live underground in their secluded own cosmos.
Luca, an adventurous boy, and the curious and clever girl Sophie are drawn into this world. The two children could not possibly differ more: he, emphatically casual (jazz elements), she, sensitive and dreamy. But their joint experiences bring them closer together.
A brilliant march characterizes the opponents of the black dwarves, the blue goblins – once united, they are now enemies. Proud and defiant, they hold their ground, although they cannot obscure the fraternity with the black dwarves now long gone – the principal theme briefly flares up.
Sophie’s Gondola Song describes a boat ride on an underground lake. Above the ‘waves’, played by the guitars, there is a fleeting appearence of the magic motif, before the solo mandolin and solo guitar set in with the Magic Mandolin Song, finally being joined by the entire orchestra.
All the while, Faol, the dreaded werewolf, an unrestrained and haunted creature, is raging through the underworld. There is a first dramatic climax. The Secret Garden Concerto introduces the central motif of the composition. A wonderful melody, appealing to the listeners' intuition, gives strength to the children, sustaining them for the upcoming adventures and significantly influencing the outcome.
The Entr'acte marks the beginning of the second part of the story. There is a first quote of the modified 'Steigerlied’, the traditional miners' song, here signature tune of the Mighty Mountain Spirit. In addition there are, as a kind of advance resume, allusions to the main theme, the gondola song, and the secret garden concerto (bass group).
Olaf's Serenade presents the werewolf who has now become human. No longer raging and shorttempered, he's now Olaf, a jovial and friendly fellow.
The Mountain Spirit Awakening, foreshadowing danger, leads to dramatic developments accentuated by sound effects and extreme dynamics in a collage ofmusical motifs.
And then the Achazurite, formed in mystical prehistory, keeping Above and Below in balance. Solemnly, and with a sparkling radiance, this part develops and passes by to vanish into Nothingness, where it began.
The Finale takes up the main themes of the work. From far away the black dwarves' main theme approaching, the GSteigerlied’ sounds up, markedly distorted in a bold choral movement of mandolas and guitars, to culminate in the garden concert motif, just before the spirited end.

Born in 1994 in Mülheim an der Ruhr, with GermanGreek descent, Aris Alexander Blettenberg belongs to the outstanding talents of his hometown. He is active as pianist, conductor and composer and laureate of many prizes, inter alia 1. Federal prize winner of Jugend Musiziert (youth plays music), 1. Federal prize winner of Jugend Komponiert (youth composes). On top of that he has been awarded the important Ruhrförderpreis of his hometown Mülheim an der Ruhr. Currently he is student at the renowned university for music and theatre in Munich in the class of professor Antti Siirala. At the age of nine he started mandolin instruction, he has been a member of the Mülheimer Zupforchester since 2009.
More information: www.arisalexanderblettenberg.de

Dominik Hackner, born in 1968 in Bad Neuenahr, began mandolin instruction at the age of six, piano at the age of 12. He received important musical impulses at the Rehlingen seminars for plucked instruments. Composing since 1983, he has authored more than 60 compositions, mainly for plucked instruments. Being a multiple laureate of Jugend Musiziert (youth plays music), in 1985 he presented his op. 25 'Konietznyana' for solo mandolin. Today, his works, partly characterized by a free tonality but often also by catchy melodies, are per formed and recorded by plucking orchestras worldwide. Furthermore, Dominik Hackner is one of the most successful and requested conductors in his field. 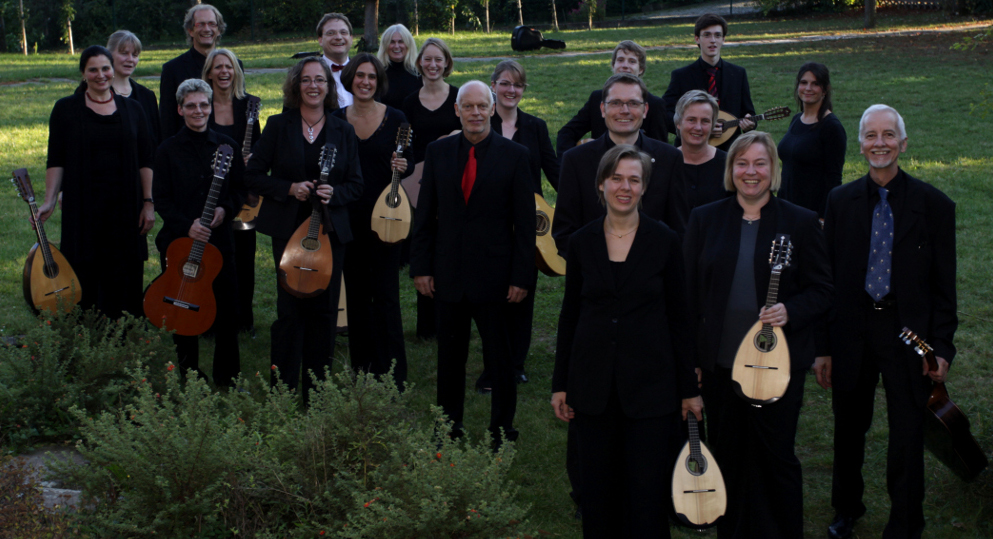 The Mülheimer Zupforchester (MZO) was founded in 1980 and is today one of Germany’s premier plucked orchestras. The MZO regularly excels in national and international festivals and competitions. Since the founding of the ‚Deutscher Orchesterwettbewerb’, the MZO has continuously won the first prize on the national level. Next to regular concerts within the cultureprogramme of Mülheim an der Ruhr, the MZO performs with internationally renowned artists at numerous events and concerts at home and abroad. Concerttours have led the Mülheim orchestra to Italy, France, Poland, Israel, inter alia. Through placings of commissioned compositions for plucked string orchestra we aim to promote contemporary music. Seven CDs have now been published, which represent the wide range of the orchestra.